In Defense of Squats and Deadlifts.

It seems appropriate to begin this article with a "thank you" - a thank you to the strength and conditioning coaches out there who go the extra mile and teach their clients how to squat, and perform deadlifts. I say thank you, because in gyms across the country these lifts, and their variations, are as rare as a $2 bill. Certainly not due to any danger in performing the lifts themselves, but due to the inability of the coaches to a. teach the lifts, and b. pick up on the postural/tissue tension faults that cause the lifts to break down. Due in part to a. and b., many coaches simply resort to throwing their clients on leg press machines and watching them, well, sit and press away. One of my favorite quotes by Mark Rippetoe is "the only problem with barbell training is the fact that the vast, overwhelming majority of people don't know how to do it correctly". Truth be told.

For just a moment I'll side with the coaches who don't teach these movements. Many clients, when interviewed about their training and injury history, quite adamantly state that these lifts hurt their back and knees. If I were a new, inexperienced coach, I'd not want to encourage clients to perform movements that created pain. And if I were a client, I'd not want to be led to perform movements that hurt. However, that's the end of my defensive role, because I'm not a new coach and because I've led dozens of clients through training programs that fix pain and injury. And, yes, you guessed it - these programs include heaps of squats, deadlifts, and their many variations.

Let's take a look at these lifts!

Go stand up over your toilet, sit down on it, and get back up again. You've just performed a squat (probably technically poor, but you've got the idea). Now, go into your living room, bend at your knees, picking something up off the floor "with good lifting posture". You've probably just done something resembling a deadlift. Now, granted the numerous times daily you get off the toilet or pick stuff up off the floor, it's amazing to me when clients report that their doctors or therapists tell them "just don't squat if it hurts". I then ask them to get additional advice on how to go to the bathroom, pick stuff up, get in and out of the car, stand up from a park bench and generally survive without the ability to squat. As you well know, life becomes rather difficult when you lose, or choose not to train these movements.

Below is a picture of a back squat, full depth. When performed correctly (the key word being correctly), the squat is a very useful exercise for developing strength and power of the hips and core. Along with the squat, the variations (lunging patterns, etc) are really useful in developing knee stability. 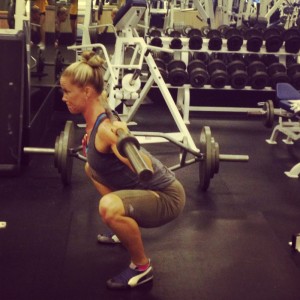 When people complain of pain during this movement, know that it's not the movement - it's the poor joint health, and excessive muscular tension that creates pain felt in the movement. Due to excessive amounts of time sitting, most people have lost range of motion in their ankles and hips, which doesn't permit an easy descent to the ground.

People have extremely tight quad and hip flexor muscles, tight hamstrings, tight lateral glutes, and really weak/flat butts. All of this contributes to excessive strain on the knees and lower back, which is then felt when squats and deadlifts are attempted.

The deadlift really builds back and hip strength, particularly in the lumbar spine. One must learn how to hold the back in a rigid position, allowing the power of the movement to come from the hips, shoulder blades, arms and hands. Below are pictures of the conventional deadlift, and the 'sumo' style deadlift.

People who are challenged in the squat are usually challenged in the deadlift. However, the good news is if you fix 'stuck joints and muscles' in general, you will be able to perform both of these lifts - killing two birds with one stone, so to speak. 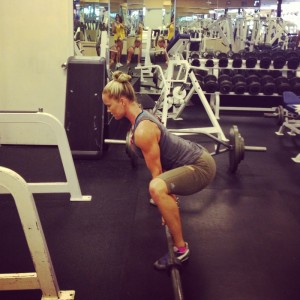 Why you want to squat and deadlift. Even if just using your own bodyweight.

Most people aren't motivated by being able to get off the toilet at age 85, or being able to pick up bags of groceries. Most people want a tight, rocking, sexy ass bubble butt that looks hot in a pair of jeans. Ok, fine. Learn to do these lifts, and you'll happily accomplish all the above. When I'm 85, I'll let you know if my rear is still worth a nice pair of jeans.

Your next step is likely to find a coach who knows what the heck they're talking about. I'd recommend myself, the coaches at CrossFit Rebels in Clearwater, and Eric Stratman at The Next Level in Tampa.

Till next time,
Ashleigh Gass