A little while back, I wrote an article called "Great Guts", where I covered the basics of our gastrointestinal (GI) system, otherwise known as the "second brain", and the "enteric nervous system". Ever wonder why our GI system is referred to as the "second brain"? It's because this organ system has its own, independently working lymphatic and nervous systems - and a huge amount of whole-body resources dedicated to it (2).

In "Great Guts", I focused primarily on the big picture of the GI system, covering the basics of structure and function as a whole, the importance of its health, and a bit about what can happen when it's sick. Briefly, I outlined some steps necessary to improve it, which included food and supplement strategies.

A few clients as of late have inspired this next article. On the positive side, clients whom, after restoring healthy gut bacteria, have finally rid themselves of allergies and asthma, while reducing inflammatory markers and losing fat (around the abdomen, mainly). On the "makes me insane" side, a couple new clients who, either themselves, or, their family members, insist they need to have their gallbladder removed. Having "pain", or "gallstones" are a couple reasons this occurs (removal of the gallbladder is quickly becoming the number one surgery in the US). One of these clients (let's call him Jack) was told by his primary care physician that he HAD TO have his gallbladder removed. I quickly referred him to another local MD who specializes in nutritional/preventative medicine. Jack didn't have anything wrong with his gallbladder at all - what he had was a bleeding ulcer. Yep - choke. Upon treatment of this, his symptoms quickly resolved and he's back in action - gallbladder intact!

Rather than unwind why the organ is sick and diseased in the first place, conventional medicine, combined with lack of responsibility on behalf of the patient to dig deep and get second opinions - the gallbladder is removed. And at that point, long-term complications really begin to brew. Complications for the rest of the GI system - because the patient will continue to live in the EXACT manner that created a sick organ in the first place. This usually happens because our current, typical mainstream medical community spends exactly ZERO time educating patients on what the heck caused problems in the first place.

Due to the above inspirations, this article will focus more on the symphony of the GI system - how the various organs communicate with each other, and why you want to do all in your power to keep them.

Let's continue on the gallbladder kick, and take a look at what this organ does. Actually, let's take a look at the liver, pancreas,and gallbladder as a system - because they work together. First, a picture, so you can see where these organs are relative to one another. 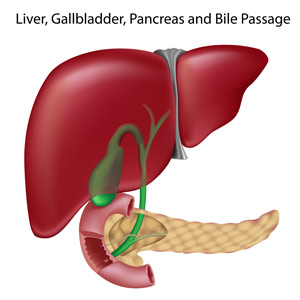 Most of you know that the liver detoxifies stuff - stuff like alcohol. Everybody knows on some level that a night of drinking kicks the liver into overdrive. Beyond detoxification though, the liver has an important role in digestion: it produces and secretes bile - about a pint of it daily. Bile is made up of bile salts, bile pigments, and cholesterol, and is responsible for the emulsification of fats. Emulsification is the process of breaking large molecules of fat (incoming from the diet) into smaller molecules that can be digested. So, now you know that the liver does more than just detoxify stuff.

Removal presents serious complications long-term, however. Complications arising from significant handicap in the digestion of dietary fats (including the beloved family of omega-3 fatty acids), and major essential fatty acid deficiencies. This can lead to increased inflammation in the body, which opens the gate to bigger, meaner problems.

Gallbladder removal as a primary 'treatment' strategy would have been like the neurosurgeon amputating my leg below the knee to 'treat' the temporary loss of sensory and motor function of my foot and calf, secondary to a 7mm disc blowout at L5-S1. When that disc herniated, it displaced the L5-S1 nerve root, which shut down the function of my lower limb. Of course, the neurosurgeon knew that in order to take the compression off the nerve root, he needed to focus his efforts in the lower back - not amputate the leg. See where i'm going with this? Address the cause of dysfunction, rather than cutting out the dysfunction as though the body invented it out of thin air.

Now let's look at the pancreas, an organ most people associate on some level with insulin, and diabetes. When bile is released from the gallbladder, the pancreas jumps in and begins to release pancreatic juices into the small intestine. These juices contain digestive enzymes, as well as an alkaline fluid that helps neutralize stomach acid. The digestive enzymes include trypsin and chymotrypsin (they help digest protein), amylase (which helps digest polysaccharides), and lipase (which helps digest fats).

At this point, I really hope you're grasping how a few of the key organs of digestion work together, in unison, to assist the digestive process. How the liver produces and secretes bile, then transfers it to the gallbladder, which then stores it until fatty acids arrive, at which point bile is again secreted into the small intestine. And the moment bile is released into the small intestine, the pancreas "knows" to release it's pancreatic juices, loaded with digestive enzymes, to continue this amazing process known as digestion.

And now I ask you - knowing what you know now, explain to yourself why preservation of this system, the gallbladder in particular, is so critical. Really think through the implications of having this organ removed as a primary treatment protocol.

If you are having problems with digestion, or have been told you need to have your gallbladder removed, go see an MD or DO (they MUST have a subspecialty in nutritional biochemistry/preventative nutrition, etc) or a Naturopathic Physician, pronto. In the Clearwater area, here are a few of your key people: Dr. Agin, MD., Dr. Broussard, DO., Dr. Sheila Dean, RD, PhD, CCN., and Dr. Minkoff, MD.

In the meantime, pony up, clean up your diet and begin an exercise program.

Remove major food toxins from your diet: refined cereal grains, industrial seed oils, sugar, and processed soy. This stuff is found in soda, bread, commercial fruit juice, pastries and muffins. It's all making you fat anyway - extra incentive to remove it all.

Resources used in writing this article: